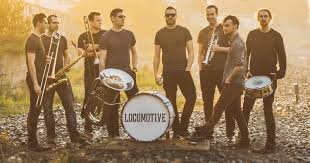 “A boisterous carnival of music” is not something you come across every day, but is how The Last Mixed Tape described the debut EP of 9 piece brass outfit Stomptown Brass. 2016 has been quite a year for the band; releasing their debut EP ‘Locomotive’, having a hugely successful Irish tour, and headlining a sold out gig in one of Dublin’s most popular music venues The Sugar Club.

The group came together with the collective goal of finding a way to merge the direct energy of street-performing New Orleans brass bands with the subtle complexity of contemporary compositional arrangements, and is made up of this impressive list of members and instruments: Liam Ryan and Rob Grant on Trumpet, Ciaran Sutton on Tenor Sax, James O’Leary, Lorcan Brennan and Finnian Kelly on Trombone, Brian Larkin on Tuba, Fiachra Kinder, Conor MacSweeny and Darragh McGrath on Drums.

‘Locomotive’ is made up of songs that draw on the rich tradition of funk and blues, creating a universally accessible, funky, up-beat kind of music, with layers of rhythmic and dynamic complexity. All original pieces are arranged and composed by band member James O’Leary. Stomptown Brass’ music exemplifies everything that is brilliant about brass; they are a constant wall of sound with a powerful, authentic natural energy that has the ability to move from stormy and explosive, to soft and stripped back, and is timeless in nature.

You can find them on the AMP player here: Listen on the Avant Music Port player