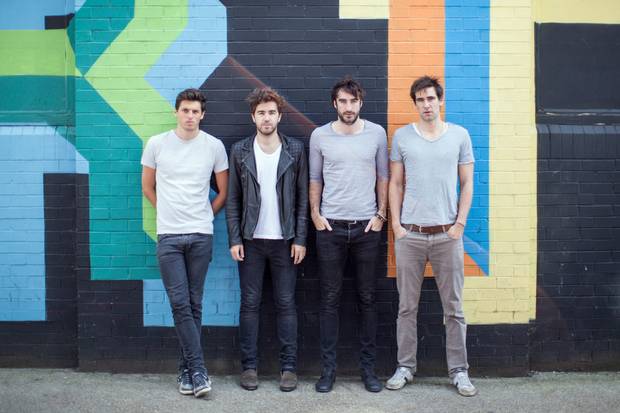 Ten years of consistent success is something most bands can only dream of. Within this time, The Coronas have produced five studio albums, extensively toured the world, played many major festival to huge crowds, have established an incredibly loyal following on home-soil, and what’s more; are still on the go. Producing five studio albums results in a strong collection of tracks, and we’re excited to have them here in the AMP catalogue.

Band members Conor Egan, Graham Knox, Dave McPhillips and Danny O’Reilly released their first album “Heroes Or Ghosts” in 2007, and in that showcased their understanding of how to create slow burning indie rock (‘Heroes Or Ghosts’) as well as uptempo, driving rock anthems that would soon be the soundtrack of many youth’s carefree summers (‘San Diego Song’). Since then, the Dublin four-piece have kept their indie rock formula going and have added different layers to their sound along the way. With producer Eliot James (Two Door Cinema Club) behind “Trust The Wire”, the group’s most recent album, there is more of an electronic flavour present overall, with the subdued, ambient feel of ‘We Couldn’t Fake It’ and the upbeat dance rhythms of ‘Real Feel’. Whether it’s the soaring chorus of a ballad, or a softer, melancholic moment of a slow burner, frontman Danny O’Reilly’s vocal is powerfully heartfelt, and showcases the band’s talent for songwriting. Lyrically, they are masters of love driven ballads, but whether it comes to love (‘Closer To You’), heartbreak (‘Someone Else’s Hands’), or mental health (‘A Bit Withdrawn’), their writing is honest and emotionally raw; “It’s OK to bleed but I bruise too easily” – (‘Give Me A Minute’).

As a festival band, whether it’s a soaring chorus of one of their rock anthems, or a slower declaration of heartbreak or love, their fans love to sing along. As a result of this popularity The Coronas have really put their stamp on the sound of Irish music – to the point where it probably wouldn’t be an Irish Summer if The Coronas weren’t singing their hearts out with their fans in some festival field/tent somewhere at some point. An exciting few months are in store for the group with gigs confirmed in America, Canada, Scandinavia, Australia, Dubai, Cork and the 3Arena, Dublin; safe to say they’ll be around for another while yet!

Video for ‘We Couldn’t Fake It’