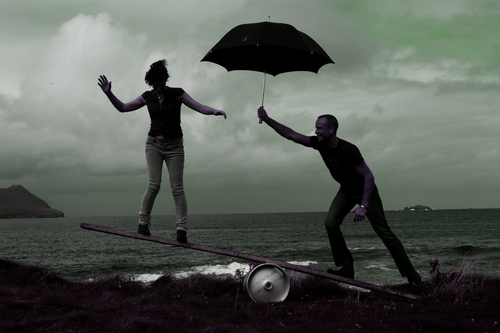 Posted at 08:00h in New, review by Jeanette Rehnstrom

Pinhole “Between the Babies and the Birds”

Behind mirrors and steam Pinhole appears. They are here to offer us splendid theatrics to which you can sway slow and ferociously in turns. There is an Icelandic pop sound to these guys; thoughts meander of into Of Monsters and Men and Sugarcubes territory, and maybe Cork (from whence the band partly hails) in some ways is the Iceland of Ireland, with its dramatic landscapes and fairytale luster. Rock and Stone sneaks about, in a steady pulse the clock speeds up its seconds, then the song draws itself up from the underground, revealing itself as an alternative phoenix, wings in silvery sheen, rising from moon dust. God Was Making Snow mixes male and female vocal theatrics, swinging from slow gentle movements to wider and more operatic gestures, reminiscent of the flamboyance of say the Decemberists. Then Pinhole has a definite Portishead feel to it, both vocally as well as due to its moody jazz temperament. Having already played on the Irish TV music program Other Voices this band is very likely to draw further major interest in the near future.