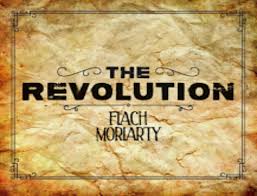 Posted at 14:09h in New, review by Jeanette Rehnstrom

Perfectly timed Fiach Moriarty pulls this album out of his musical hat. The revolution is here; there is no doubt about that after the recent Irish referendum. However, what Fiach Moriarty in particular is referring to, amongst other similar historical social justice issues, is the 1916 uprising/rebellion of the Irish republicans against the British colonizers, which a couple of years later lead to Irish independence. Needless to say with the centenary coming up Ireland is full of gratefulness towards the brave people that fought and lost their lives in the process. Irish film and television is on high alert with the film The Rising (produced by Kevin McCann) and the RTE Irish Television series Rebellion (directed by Aku Louhimies, produced by Colin Teevan) being filmed as we speak, just to mention the tip of the iceberg expected to loom ever larger as the new year travels towards us.

In Fiach Moriarty’s distinctive voice the stories from “The Revolution” roll on out with serious care but not without a good bit of cheer. Each song a small vessel sent through the veins of a revolutionary people’s strengths and weaknesses. Full steam ahead from the get-go Fiach Moriarty starts off with a nod to Gil Scott-Heron in “Revolution.” Much of the music is so easy on your ear that you can mistakenly take it for being quite passive, however, on the second and continuous listens what you find is that there is a lot more complexity here, and a hell of a lot more frustration than it first suggests. I can’t help thinking of The Style Council as a good comparison, i.e., easy but still thoroughly angry and definitely political at the core. In “Oil and Water” Fiach Moriarty teams up with his longtime friend Wallis Bird in a sweet duet about risks taken (or not) in more personal relationships. All in all this is a well-rounded album with a lot to offer. Fiach Moriarty might just be the man for your next synch opportunity.